Speaking truth to power is not what is going on with Open Data, although that was my understanding when I first learned about open data, about four years ago. I am more cynical now.

What IS open data?

Here’s a definition, straight from the source, which is ultimately the Open Knowledge Foundation (OKF), whose major funding sources include Pierre Omidyar (e-Bay, First Intercept and Glenn Greenwald). As specified by the Open Definition, open data is data that can be freely used, reused and redistributed by anyone – subject only, at most, to the requirement to attribute and share alike. (What is Open Definition? Open Definition is another OKF project.) Key tenets are the following:
Availability and Access: the data must be available in its entirety, in a “convenient” format and at minimal cost, e.g. internet download.
Reuse and Redistribution: users of the data must be permitted to reuse and redistribute it
Universal Participation: everyone must be able to use, reuse and redistribute it, e.g. ‘non-commercial’ restrictions preventing ‘commercial’ use, or for educational purposes only, are not allowed.
The higher level goal is interoperability. For now, that mostly means being able to intermix data sets from multiple providers. 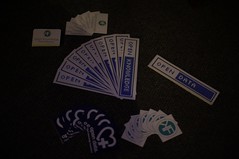 Nota Bene! There are no restrictions on commercial use, nor should any assumptions about upholding privacy be made. Open data is/are about portability, so data generated by wearable tech and smart cities as well as Internet of Things devices is/are fair game.

The scope of the Open Knowledge Foundation’s openness initiative is quite broad. It includes, but is not limited to, open access, open data, open education, open science, open government, open licenses and open software. One may be granted Open Data Certification credentials, issued under the auspices of the Open Data Institute, known as ODI but NOT affiliated in any way whatsoever with the now-familiar ODNI! (Parenthetical aside: I urge you to view the immediately prior inline link. It is an ODI blog post titled, “The Data Reformation”. The post itself is visually lovely and well-written, though overly ambitious. Read the single, excellent comment, which astutely assesses the inherent challenge facing widespread open data usage.) There is even an Open Data Census by nation. Everyone from the Wikimedia Foundation to the World Bank is involved. 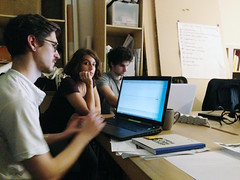 Ed and Laura at the School of (open) Data? No, just kidding.

In fact, the World Bank is working closely with the Omidyar Network to engage for-profit entities in a nascent Open Government Partnership Private Sector Council, which was set up to provide recommendations to the OGP Steering Committee.

Of course, The World Bank will facilitate this initiative through (its? Omidyar’s? Jimmy Wales’s?) Open Private Sector platform.

not for altruism or philanthropy, but because it can actually improve their bottom line. JP Morgan Chase provides information to the banking authorities on its thousands of subsidiaries. Wal-Mart works to offer visibility into its supply chain through real-time, anonymized worker feedback from 279 factories in Bangladesh.

This isn’t entirely correct though. The linked example report from JP Morgan is NOT optional. It is not prepared for the sake of “improving bottom line” profitability. Instead, it is a mandated regulatory requirement by the U.S. Securities and Exchange Commission under the Securities Act of 1934. The annual Form 10-K filing must include, by definition, a list of JP Morgan Chase & Company’s U.S. and offshore subsidiaries. Although Mr. Herzberg chooses to link to the unstyled flat file, the same JP Morgan data, and much more, is already available, with interactive visuals, via the SEC’s next generation EDGAR system.

What about Wal-Mart? The worker feedback system is part of a larger and sadly, more typical Wal-Mart story involving failed safety inspections at those 279 factories in Bangladesh due to inadequate compliance with both local legislation and global standards.

Government? Licenses? Software? What’s up with that? 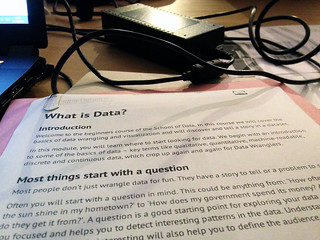 What about FOSS, GNU, FSF, GPL and Creative Commons? What about open data licensing in the EU? Maybe this OKF post about the Open Software Service Definition will be helpful, insofar as it pertains to online software.

How will the open movement and transparency improve business competitiveness? The World Bank and OKF via the Open Government Partnership are excited because:

Open data and transparency [will enable] multinational companies like JP Morgan Chase and Wal-Mart to improve their bottom lines.

WHAT?! JP Morgan and Wal-Mart don’t need any help with their bottom lines! They are huge, highly profitable corporate organizations already. This isn’t supposed to be the goal of openness, open cities and open government!

There’s a little more. Given the fact that there are long-extant governments, otherwise known as sovereign nations, with well-established infrastructure and domestic economies, I do not understand the need for the following Open Knowledge Foundation activities as effected by OGP (emphasis mine):

Sedex Global, a responsible sourcing organization working with 36,000 firms, announced a partnership with the World Bank Institute, to pilot the Open Supply Chain Platform, as part of the Open Private Sector Platform. This new initiative will complement the Open Company Data Index which seeks to incentivize governments to increase transparency around business registries…and possibly new legislation that would challenge the traditional way of doing business. 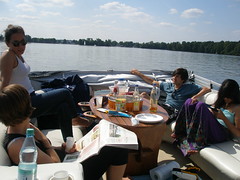 Highly positive: Outdoors, reading a newspaper, talking and nary a computer in sight OKF 2013 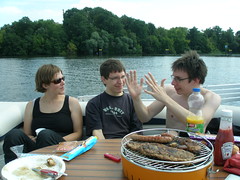 The limits of transparency

While open data isn’t a direct cure for injustice, I am not convinced that open data is increasing transparency. It does not appear to offer beneficial insight into the workings of power.

I get asked pretty often whether I “believe” in open data. I tend to murmur a response along the lines of “it depends,” which doesn’t seem too satisfying to me or to the person I’m talking about. But this morning, I’m happy to say, I’ve finally come up with a kind of rule, which isn’t universal. It focuses on power.

Namely, I like data that shines light on powerful people. Like the Sunlight Foundation tracks money and politicians, and that’s good. But I tend to want to protect powerless people, like people who are being surveilled with sensors and their phones. And the thing is, most of the open data focuses on the latter. How people ride the subway or how they use the public park or where they shop.

Something in the middle is crime data, where you have compilation of people being stopped by the police (powerless) and…